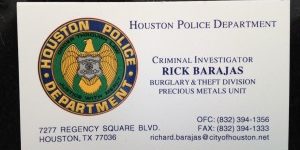 Houston Gold Merchants got a visit from the Houston Police Department today. I was pleased to have had the opportunity to chat with HPD Officer Rick Barajas, Criminal Investigator from the Precious Metals Unit of HPD. The Precious Metals Unit is newly formed and its members, including Officer Barajas, were out getting to know the dealers in the city.

Officer Barajas outlined the city, county and federal requirements for metals dealers in Houston. The City of Houston has put forth some suggestions to dealers in the city regarding potential changes that could be made in an effort to regulate the industry, curb crime and discourage the fencing of stolen merchandise, most notably gold.

Officer Barajas revealed that (shocker) some existing, well-established, high volume metal dealers (who shall remain nameless but have more than 100 stores in Texas and advertise all over the place) are  resisting the new regulations governing the sale of precious metals. Imagine our surprise. Big business rejecting governmental regulation. “You’ll kill the industry!! Don’t make us write all these words, it hurts our hand! Don’t force us to take a picture of all the gold. It’ll be SO HARD. Don’t regulate us, mean old City of Houston…” PLEASE.

Houston Gold Merchants welcomes the additional oversight of the City of Houston and Federal authorities if it helps our customers and our industry. We encourage the use of transparent, honest practices in all facets of business that foster community trust and enhance the well-being of the neighborhood and the City.

Sell your gold to Houston Gold Merchants, we pay more and we do the right thing.